Return on capital employment also known as ROCE is a ratio which is used to measure how much a company is profiting and the how efficient it is managing and using its capital. To put it in other words, the ratio measures how easily a company is generating its profit from the amount of capital it has. The ROCE ratio is often applied by investors while they are in search of a suitable investment candidates.

The Formula For ROCE Is

How To Calculate ROCE?

ROCE is an easy method for comparing how much profit is happening across companies depending on the capital they use. There are two different methods which are applied while calculating return on the capital employed: capital employed and earnings before interest and tax. These earnings ahead of interest and tax (EBIT), can also called operating income, and it shows how much a company can earns only from its operations without any importance to their interest or taxes. 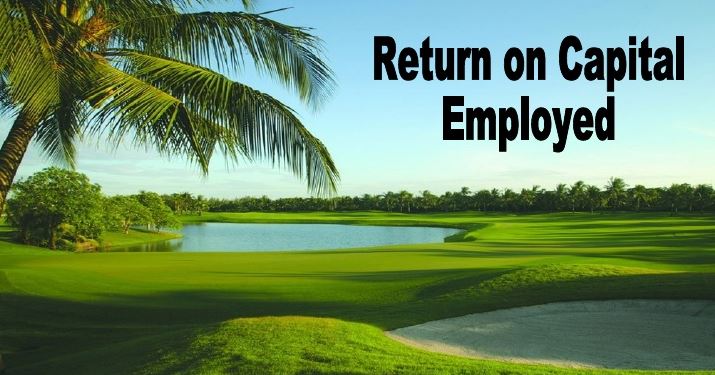 EBIT can also be calculated by subtracting from the revenue the cost of all the goods sold and other expenses in operating. Capital employed can then be called the amount of capital that a company has used in profiting. Therefore, it is the sum total of the equity of shareholders and liabilities for a debt. This one can be simplified as subtracting the total assets from the current liability. Now you cannot use capital employed at any time, investors analysts and frequently calculate ROCE on the basis of the average capital that has been employed, which takes the average of closing and opening capital  that has been employed for the analytical time period.

Analysing Return On The Capital Employed:

When you want to compare the presentation of various companies in different sectors of capital-intensive such as telecoms and utilities, it is then ROCE is most useful. It is absolutely not like other fundamentals options like equity return (ROE), because it analyzes a company’s profit related to its common equity, the ROCE considers some other liabilities accordingly such as debt. This will therefore lead to a true evaluation of the amount of debt that a company is in, and this ratio is also an essential factor on the basis of which a company’s performance is judged.

Let us consider that there are two companies which are operating in the same industry sector  such as Company A and Company B. the table below will demonstrate what is the ROCE for these companies in the year 2017 and 2018

If the capital employed of both companies are compared then we can come at an inference. Although Company B had had more percentage of sales for that year and more valuable assets, in terms of value, however Company A’s ROCE is 43.51% is higher than Company B’s 15.47%. This means that Company A has done a better job in deploying its capital than Company B.

ROCE is a profit ratio for a long term basis because it shows how easily assets can perform while taking into consideration any other finance for a long term period. This is the reason why ROCE is more useful a ratio while judging return on equity and understanding a company’s longevity.

This ratio is therefore on the basis of two important deductions which are capital employed and operating profit. Net operating profit is sometimes referred as EBIT or earnings that come before interest and taxes. EBIT is therefore reported on the statement of a company because it is evident of the profits that a company is generating from all it operations.

Capital employed is quite an important financial term since it has been used to refer to many such financial ratios. Often this term refers to the whole of the assets that current liability has and less than the current liabilities.

The return on this ratio testifies the amount of profit that can be done on each dollar that has been generated by the company. Obviously, in such case, a higher ratio would mean  that the company is generating more dollars of profits from each dollar of capital employed, and is in a good condition. So a higher ratio is more favorable than anything else. To explain it more clearly, a return of .2 means that for every dollar that has been invested in capital employed, the company made more than 20 cents of profit. So an investor before investing in your company will obviously have a look at this ratio of yours to understand whether your company is running at loss or profit.